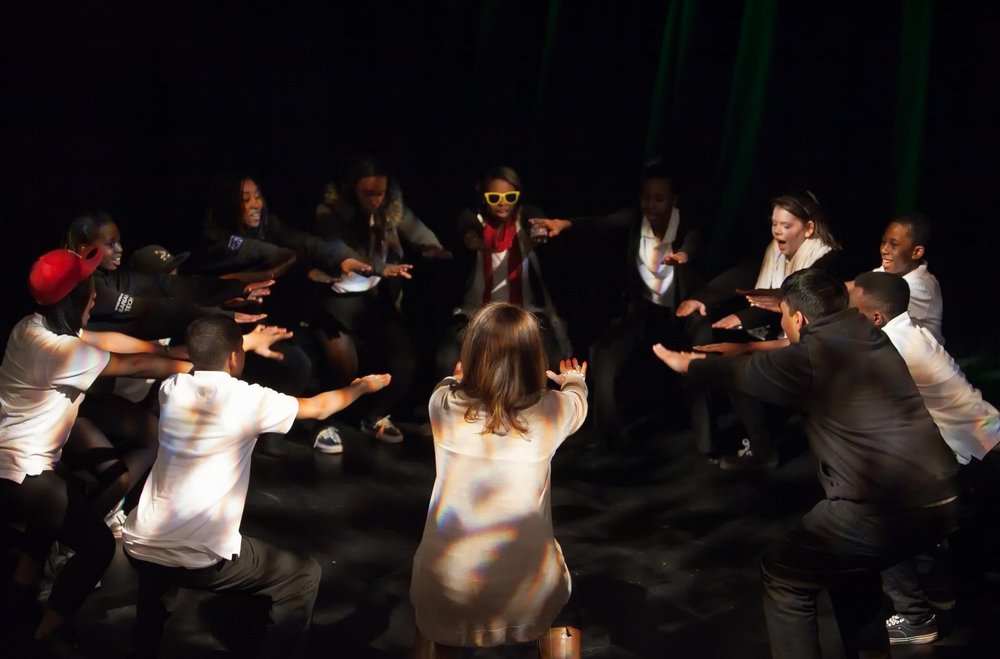 Happy Belated Birthday Bounce! I am a day late in doing this because I spent yesterday at home with a poorly toddler instead of eating cake, looking at photos of past projects and planning some clever advocacy of what turning 11 meant.

However, a wise woman reminded me last tonight that I should just speak from the heart. So here goes …

After 11 years, we’re still here. That feels like quite a thing. Over 11 years we’ve changed, evolved, grown up and found our voice.

We’ve worked with hundreds of young people…literally hundreds. From three to 21 across numerous boroughs. We’ve made young people fly, cry, sing and dance. They’ve been amongst other things irate teenagers, princesses, witches, wizards, ghosts and a donkey.

Together, we’ve made work on estates, in underused theatre spaces, in youth festivals, in a hospice, a museum, schools, alternative education programs, at the seaside, in a classroom, along a riverside and at festivals.

Our work has evolved in form and content. We no longer measure our success by the theatre we make but the theatre we put into people’s lives…if you will.

This autumn, some young people are making an epic piece of interdisciplinary work about confronting loneliness in the city to put in the Saatchi Gallery. In another project a group of parents finished up cycling an old community room. Last week they commissioned their first workshop with cake (wise women) . A group of children in another project want to write kind notes to their teachers and hide them in the register for International Kindness Day.

Looking back over a decade, Bounce has constantly evolved. In response to my concentration span, my artistic interests and later on down the line a teams interests. It has also evolved in line with the social and economic climate. We began in the giddy days when every child mattered and there was an abundance of money to invest in after school clubs and projects. We just about held it together when those services were suddenly dissolved. We weren’t mature enough (emotionally or financially) to be ready for that. Over the years, we’ve swam the waves of funding whilst trying to understand which in trend banner to hold to determine whether we were community/outreach/participatory and so forth.

Now we’re 11 we’re old and have officially stopped trying to be trendy.

Politics, statistics, evidencing and trendy words aside, when it comes down to it, we’re still here because we think with our hearts (and occasionally with our heads) and want to provide a space for people to be listened to.

A wise woman (I know a lot of them) once told me I practise ‘deep listening’. I never understood it until now. I think I’m half way to getting it. Maybe. As I see it (at the moment) Bounce is a collection of tiny stories about people.

It’s the girl who was bullied at school, joined a project and wore her down by the end of it because she felt like she belonged somewhere.

It’s the young carers who gave up everything but Bounce as their after school club for years.

It’s the girl whose reading levels went up after she joined a drama project.

It’s the boy not in school and who went on to win a competition at the Donmar because he had the time to share the fact he could write poetry.

It’s the girl who spoke to strangers for the first time when she did front of house for a project.

It’s the 24 young people at risk of slipping out the system turning up to rehearse after school to be in a play.

It’s the girl who curated an exhibit at the Saatchi Gallery a year after declaring she was too ghetto to be there.

It’s the invisible thing that happens when you listen to people and give them a time and a place to be creative.

All of us in the core team have been the uncertain young people who found the world made sense to them when they stepped into the arts. So I just really mean it when I say the power of this work is transformative. Creativity has made me who I am and still sustains me at the times when I have navigated the unexpected in adulthood. I think creativity is something to really hold onto at the moment. I read the news in Twitter headlines and snapshots since having a toddler, but the world is increasingly divisive and holding onto what creativity offers is ever more vital.

Having Bounce is a really beautiful gift. I founded it but its built on the spirit of everyone who has helped me make it. It’s a really special thing to be a part of and it is with great joy I celebrate our 11th birthday now (and later in the week… where there may well be a bit of cake).

As we move into our second decade, I am excited by our next evolution. As we produce theatre alongside installations and develop lines of research to support enquiry based learning.

It’s big and its scary and it might not amount to anything, but perhaps after 11 years I’ve learnt there’s nothing to fear from having a pop at it.

Happy Birthday Bounce. You are ace.