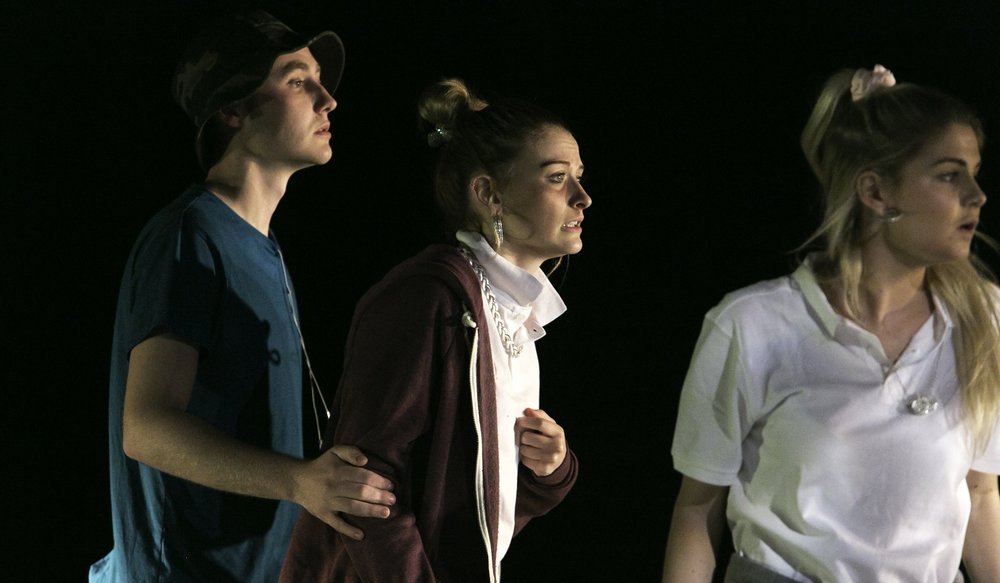 I am three weeks in to working on Emoji, a brand new piece of theatre cocreated with Anstee Bridge.

It’s a complex project in some respects. There are a lot of challenges to meet. The young people aren’t all keen on theatre being one. One young person told me he thought the script to date  ‘was boring because it had to many words in it’.

As the person responsible for making the script, I admittedly had a fleeting notion of a mime. I am not a confident writer. I confessed this to one young person. She told me not to be scared. My writing was good, my language was just a bit ‘back in the day.’

However unsure of myself I am in writing, I am enjoying the process of cocreating the work. I started with the intention of having everyone develop the story I had mapped out. I’d been quite clever it rolled a fairytale into a social media story that went viral.  After meeting one student this was shredded up and we just changed everything. One week on, it was completely overhauled as everyone put in their ideas. It was less fairytale and more Eastenders perhaps, but I still liked it. I have had nervous moments. Trying not to crush enthusiasm but wanting to recognised an actual fire going off in the middle of it probably was beyond the limits of my budget. Accepting I am old has been another thing – am I actually cool enough to write this with them?

I have tied my brain up in loops trying to task myself with working out how to tell this story, which is part mine and part theirs. It’s made particularly challenging when they work in four groups across four days. I am the pin holding the all together to encourage them to engage with making a performance and becoming a community.

In some respects it’s very liberating precisely because I don’t consider myself a writer. I am simply there to facilitate a story that emerges out of giving the young people a place to engage with art, an opportunity for a dialogue about their needs and interests. I have learnt about trap queens, what being basic means and that you can still use your phone without credit in Mcdonalds if you have Wifi. I have also learnt a lot about the pressures young people feel under and the mental health needs that emerge from them.

In letting go of my story, it has become their story and will end up as our story. I’m not sure where it’ll end up and if I will like it more than my original. Yet this is the joy behind fancy words like co-creation. It’s sharing a voice with young people that ironically don’t like lots of words. In doing so they are becoming a small and very loud company. Some are going to market the show because they want to set up their own business. Some are going to help write it. Others want to cast it, some want to direct.

Artistically, we are really challenged to learn about them, adapt to them and ensure this work supports their journey at Anstee Bridge. It’s a lovely, messy, scary process that means giving up artistic control and adapting to whatever happens next. In doing that, I truly believe I/we become better artists – when we sometimes step away and contemplate ourselves as that.

We are however 11 pages in. The journey has begun.

You can come see where we end up. Find out more here.