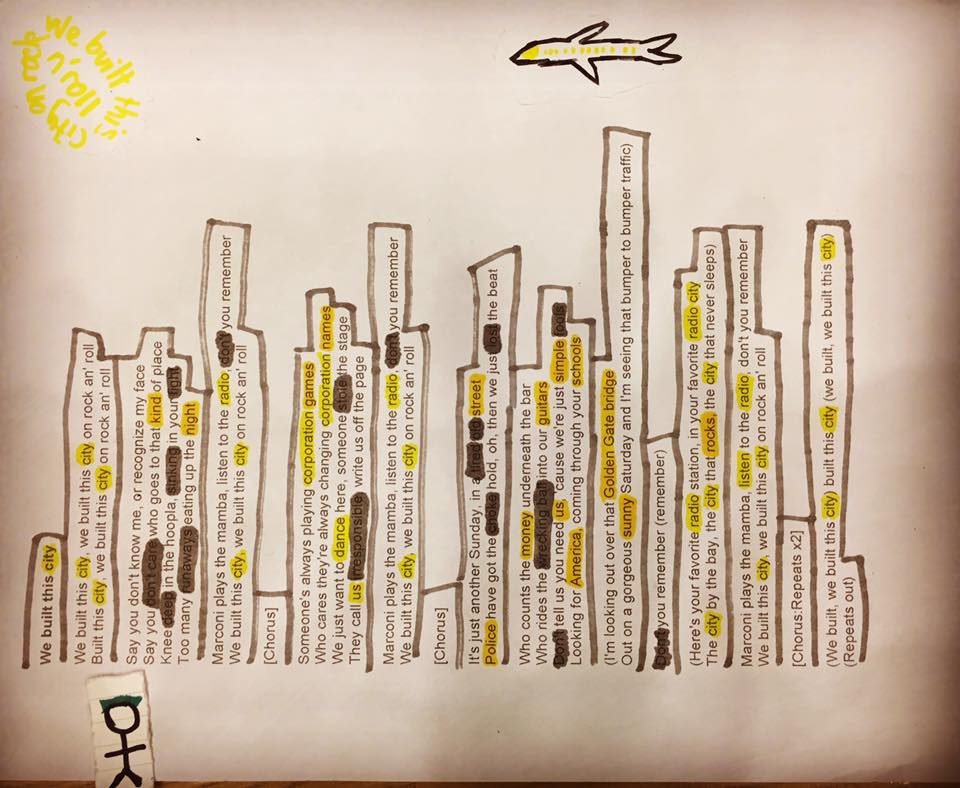 I don’t mind Trump, apart from the racism.

I don’t have any ideas.

My anxiety levels shoot up when I travel into town.

When bad things happen, good things can come out of it.

These were some of the thoughts and comments coming out of my workshop this week. Urban Stories is a project asking a group of young people to conceive and develop ideas for an interdisciplinary exhibit of their ideal town.

I stopped myself earlier in the week rushing in with armfuls of motivational quotes and poetry. This was in truth simply because it was late in the evening, my printer was about to run out of ink and my toddler son has stopped sleeping through the night. I was running on empty.

I justified it to myself that it was actually more important that I understood what they valued and what excited them anyway. I was asking them to conceive a city – which when broken down is a complex myriad of issues around politics, aesthetics, culture, transport, law and order. Where to start as the world is today?

I decided they could it without all my resources.

Travelling to the session, I had tried to go a quicker route and failed. So I was stuck on the bus. I started checking emails and whatsapp. In the ongoing attempt to be less stressed and break my reliance on technology I hid my phone and stuck my nose to the window and looked at their town.

In my calmness, I opened the session asking them for their name and something they valued about their day. I was a bit disheartened that most valued that they’d been able to complete their maths test, or their course work or some form of work. . . I’m not sure what I was hoping for but its perhaps a stark reminder of the pressures young people (and their schools) are under at the moment.

After some games and play, we settled down to develop some ideas for the project. I pulled out the things my printer had managed to spit out. I found myself reminding them not just to perform the quotes that they liked. It was meant to be a springboard to their own ideas…

As groups formed and began to tackle the seemingly simple but complex task of conceiving the narrative of their own city, I was reminded of a number of things. . .

A wise woman (who is not me) defined our work to be like building a house. I design the frame and I ask a bunch of people to come in and furnish it for me. The only thing is that non of us really know what colour we want the rooms to be. So we’re busy trying to form an idea of what it might be. An idea is as Stephen King apparently once said, like having a team of removal men bringing in and taking out furniture in your brain…. There’s a group of us all trying to move at the same time and learning to understand each other more.

So in this complex process, I sat with one group who said they didn’t have any ideas. I wondered if I’d pitched this all wrong. I also though maybe they are wary because they don’t feel as politically charge as others. Now as I sit and write about it, I wonder if maybe given the most valuable bit of their day was about work, what their brains needed was to relax, get a pizza and watch Eastenders (I learnt they liked this in the first game, the pizza I’m adding for effect). Anyway, we talked about where they live, what they liked and what they didn’t. With more conversation, questioning and probing within minutes we were talking about aesthetics of buildings, mindfulness and feelings of stress in being in a crowd.

Another group made work about Grenfell and the terroist attacks. The group of boys that either play the clowns or lie on the floor because they were tired spoke about the value of something good coming out of bad. They had images in their mind of tower blocks rebuilding and words forming. I was a little humbled by their sincerity and how I’d wrongly assumed they would do something funny.

The third group opted for devising around the shared values that keep our humanity. Equality, anti racism  … they decided that it would be a piece about people, as it was people who make the city, despite our apparent facelessness to each other, it’s our values that bind us together.

We all arrived somewhere together by the end of the session. Our house if you like had some swatches of paint on the walls.

There was detail to the idea now. The city would be made in three sections. Aesthetics  & culture, the shared values of humanity and the hope that can come from tragedy would intersect and become one place to be.

This is why creativity matters.

It’s not a straightforward process, you can’t measure it in whether you get a certain number of questions right in a test. It’s subjective and intrinsically in the bones of people. Whether they are making great theatre or cooking something so their child learns to eat. It’s the platform to be given a voice to your feelings. An opportunity to allow 14 year olds to tackle complex issues where they move from discussing Grenfell to touching on forming views about housing policy & their right to vote. It’s that journey from saying you don’t have an idea to end up identifying that you could build a city that actively encouraged people to stop and take a breathe to reduce anxiety.

I had a little note to myself that I would blog about International Peace Day today. I’m not sure what I intended to write. It’s been a week where off the top of my head there is a report on the rapid decline in the take up of arts subjects, our government continues to fall apart over Brexit and climate change is being denied by a very large country torn up by hurricanes …  I’ve never been more convinced of the importance and power of both the everyday and extraordinary acts of creativity to make a positive contribution to the way we can all make our small difference. Maybe then we’ll at least point towards the vision these lovely young people have for what the world could be.